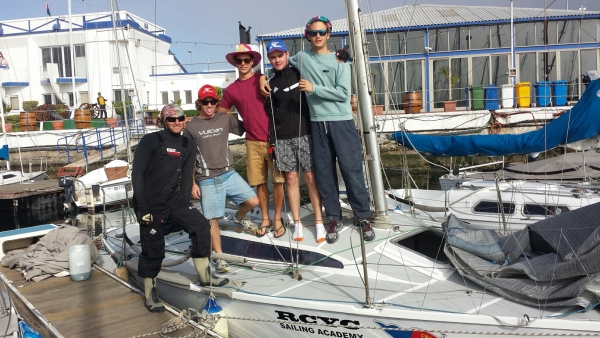 The academy was entering two teams to race the last day of the Glacier by Sanlam Summer Series. Our team on Escape won the two races in our class and even got line honors in the second race, which does not happen often on a L26. The price giving was a classy affair with the sponsor being involved and present. Well done for introducing a new and successful racing series and a new sponsor to the RCYC.
For Sunday we invited the False Bay Lipton team to train with us. Unfortunately by the time we wanted to go out for a sail, the fog came in. We got two hrs of sailing in later on, albeit in very light breeze. It’s nice to match your boat speed with another team. It sure keeps the concentration of the whole crew on a higher level.

The False Bay team is called Triple Dan for a good reason. There are 3 Daniels in the team and it sure is funny when they introduce themselves. They also pitched up with the latest fashion in hat design. This is quite a cheerful team and I am sure they will have a joker up their sleeves for Lipton. Not being used to fog in False Bay, they got a bit cold in their board shorts in our waters.

In the coming weeks we will be teaming up with the UCT team for sail training and we do invite any other teams to join us.

Our teams still have a long way to go and we will be out every Saturday and Sunday from now on. So far we were able to get all kind of wind conditions during our sail training. We are just waiting for the first big cold front to hit Cape Town. Sailing in a big NW is always fun and the downwind sailing is often rewarded with great surfing.

We had arranged to get B&G in the water for our sail training but the marina staff didn’t find the time for the slash. The boat was completely boxed in with masts and all kind of steel stuff for the marinas, no wonder they could not get the boat in.

Since B&G did not make it in the water as discussed, we have now pre-booked all splashes with the marina office until Lipton. It is quite important that our team will dial into B&G properly. If you think that every L26 does feel the same, think again. All L26 boats got differently modified during the last 30 years and despite being the same hull shape and weight, they sail very differently. We are very lucky to have one of the better boats in the fleet with B&G. Realistically there are not more than 15 L26 boats in the country that do have the pedigree to win the Lipton event. The rest of the boats are not set up properly for racing. It takes at least two or three seasons to set up a boat properly. There is a lot of try and error involved to make a cruising boat suitable for racing.

Originally we had 3 academy teams lined up for the Lipton event. Team B&G is well on track with their preparation and our second team also has got the potential to surprise during Lipton. It just depends how much time the teams will spend during the preparation of the event. Our third team has thrown the towel and will not compete in Lipton. Therefore the academy will have one more boat available for any other team to compete with. Get your team together and start training. We would like to see a big number of boats competing this year’s Lipton event. There is no reason why we can’t have 30 boats on the start line, like in the good old days. Come on team Vulcan, Nitro or Windpower, get involved.

We are desperately looking for a sponsor for our academy teams. We got two highly competitive teams and it would be great if both teams would be able to get a new set of sails for the Lipton event. Our academy team on B&G managed a second place in their first attempt in last year’s Lipton, which was run on the lowest budget possible. Who knows what they are capable of if they get better support this year? We will assure that any sponsor will get the best possible media coverage. And that’s not all. All our equipment and sails are used to get more young people into yachting. Our academy has now got 100 members and is growing constantly.

Please contact Harry on academy@rcyc.co.za if you can help with any kind of sponsorship.