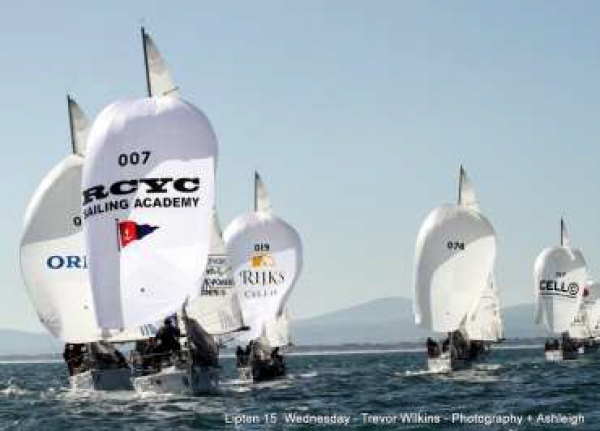 All academy activities have stopped for students who are not involved in the Lipton Cup since our 4 academy boats are being raced in Lipton. Escape and B&G by our own students and the other two from outside teams. A young team from Knysna is sailing on Mac-a-Tini and a team from Richards Bay is sailing on JML1. As I am doing the running around to keep all 4 boats in good shape, my team on Quiver/B&G is covering up nicely for me. They probably see that I am busy all the time and have never complained so far that I am not involved as much in the preparation of our own boat. If Lipton has one positive side effect for all teams, it must be the team bonding. The highs and lows in any Lipton campaign are so intense, a team has got no other choice than to deal with every challenge along the way. This does make a team stronger.

That’s something that the young Vacso Macnifico team on Escape had to learn as well. The boat preparation, sail training and team dynamics are causing enormous strain. There are many young sailing talents in this team and they have shown a good performance so far, even if the overall positions is not what they expected. They lost a crew member just before Lipton, their helmsman got sick on day 4 and one of their team had to jump in to steer the boat. I am sure there are a few other things they have to deal with. It helps that they have strong backup from their parents. They are doing a lot of running around for them. Their team manager, Mark Barnardo, was almost running out of steam lately. Hang in there Mark, you are doing a great job. Our team on Quiver/B&G didn’t have a smooth ride in their Lipton campaign either. Their helmsman dropped out 2 month ago and they didn’t have any replacement. Obviously they asked me to jump in but I was not easily convinced that I would want to be racing Lipton myself. Our students drop too quickly all tasks when they see that someone else is involved, capable to take any workload off their hands. That’s the reason why I did not commit fully from the beginning. I did not want to make it my campaign by all means. After a couple of sail trainings with the boys I did realize that they were actually quite committed and agreed to join the team.
Share This
Related Posts