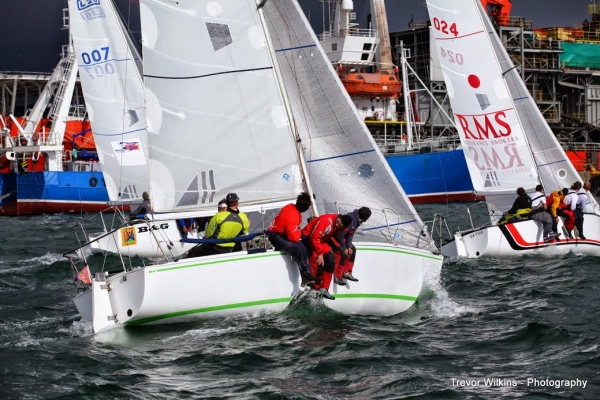 First I have been asked to lay marks for a proper sail training for our RCYC Lipton team and our RCYC team heading for New York to sail a J24 invitational in a week’s time. Then the night before the scheduled sail training, it was clear that our academy Lipton team was going to be without a driver again and I was asked to help out. I told my youngsters that I first have to find someone else to drive the Butcat before I could sail with them.

It didn’t take me long to find a replacement. Jean Vande Pitte agreed to jump in if I could find another person to go with him. In the end he even brought his son Oli, to give us an extra hand as well. I was a bit embarrassed to ask our commodore Ray Matthews if he could help out. This man is devoting all his time to the club already and still, he said yes without even thinking about it. This is quite amazing at the RCYC, our members really care and are willing to make a difference. Thanks a lot Ray, Jean, Trevor and Oli for jumping in at such short notice.
After I had this in the bag I could tell my students that I was available to sail with them.
We still had a few jobs on the boat to do before we could go out for a sail and the students agreed to be at the boat at 8am already. Apart from the sail training on Saturdays, some of the crew have been working on the boat almost every afternoon after school or work. I made it clear from the beginning that a Lipton campaign is not on the main agenda of our sailing academy and if they want to enter the race, they will have to step up and manage their campaign from the start. They really were able to surprise me during the last 3 month and I wish that their efforts will pay out in the end.
The youngsters are doing very well when we do our sail training and if there is space and time to sort the boat out in maneuvers. They become a bit shaky if they are put under pressure. I am absolutely sure that they will handle the pressure a lot better after they had a chance to do more racing.
When I drove to the club this morning, I remembered that Trevor Wilkins asked to join us the next time when we would go out in rough conditions. Today would be such a day and I called him to see if he would be interested to head out on a boat spontaneously. To my surprise he was already at the club. It didn’t need too much persuasion from my side and he jumped on the Butcat.
Greg and Dre decided to rather get a small windward leeward course laid in the flat water inside the harbor, than outside in the rough conditions in the bay.
The start line was very short, very biased and the narrow channel in the harbor did limit our options to reach the weather mark. It was really a matter to fight for the best start, to get ahead of the other two boats. Greg and his team made it clear that they would not settle for anything less than starting from the favored end and basically been able to push their nose ahead of us in all the races after the start. They reached the weather mark always in first place. That left Dre and our team only a chance to fight for the second position. During the first couple of starts, the crew work on B&G was rather shaky and we had a lot of small hiccups which did lead to bigger mistakes. Nothing seemed to work as we usually do in our sail training. It took us too long to get the boat to speed, our tacks have been uncoordinated and the kite handling was quite poor. We worked hard to reduce the problem zones after every short race and drastically improved our crew and team work. In the last two races things were shaping up and we were able to get ahead of Dre’s team.

After the other 2 boats went back to their mooring, we decided to spend more time to get our kite handling sorted out. Our timing during the jibes was not right and poor Nick really struggled to handle the foredeck. It is so easy to pick on one crew member if things are going wrong. In reality it is a combination of more factors and usually is involving more crew members, if not the whole team.
When we started to get our crew work sorted out, things were just falling into place. The last couple of jibes were almost perfect and we could leave the water with a positive feeling of achievement.
Ryno was carrying home a nice souvenir from our sail training. The boom hit his head so hard, he was growing a nice horn. As a matter of fact, he managed to dent the boom slightly with his forehead. Luckily he was taking the hit very well and did not show any sign of drowsiness. He just shook his head once or twice and carried on sailing.
The ‘Toughness Award’ goes to Ryno for his boom stunt, the ‘Never Give Up Award’ goes to Nick for not grinding his teeth on the foredeck and the ‘Skipper Award’ goes to Daniel for showing some good leadership qualities.
As usual, it was a great pleasure to sail with you guys.

After we had a tasty meal from KFC to round up the day, the boys decided to drop the mast on B&G. Since we have to transport two boats to Simons Town but only have one roadworthy trailer available, it made sense to get one boat out of the way already. By now B&G is in Simons Town already and the Bishops team is coming down this Saturday to prep JML1 for the transport.

It is only 2 weeks to the Lipton Cup start and we were forced to do another crew change to save the Lipton campaign our academy team. Our helmsman Duane Petersen could not make it to any sail training during the last 4 weeks. It was a very nervous time for the whole team and we were forced to look out for another driver. Luckily Sieraj Jacobs agreed to join our team and is keeping the hopes for a successful Lipton campaign alive for our boys.

Thanks a lot to all the members who already bought tickets for our Academy Team Lipton raffle, which is taking place on Friday the 15th August at 19:00 in the main hall. If you haven’t had a chance to buy tickets, we are still selling them. Ask at the reception if you would like to purchase one. The prize table is getting bigger every day and a lot of lucky members will walk away with a nice prize.