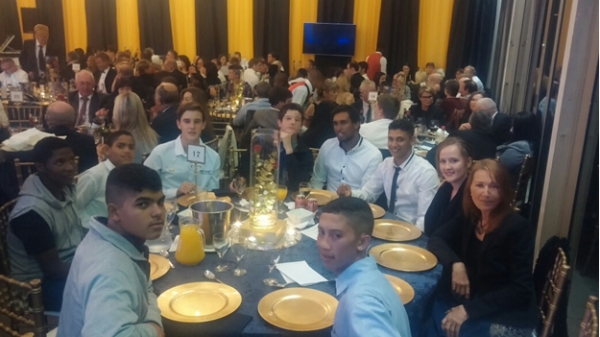 We had a great time at the Club Awards Evening last Saturday. A big thank you to the organizers for hosting this event.

The yacht club kindly allocated 24 seats to our students and I thought it might be hard to fill the spots as our students are currently doing their exams. The spots filled up so quickly that I was running out of available seats in the end.

I don’t even think the students were after a free meal. Much more importantly they seemed to feel proud to be invited to the awards evening. It was highly amusing to witness how some of our students treated the starter when it was served to the tables. Most of them don’t seem to care for much other food than burgers & chips and a few of them were even too scared to try the starter. And I thought they were hungry…

Obviously the fair amount of verbal entertainment was not their favorite part of the evening but when they were called one by one to collect their academy awards, all students lightened up again. Much more important than the award was the recognition they received from our club members and the applause afterwards. A lot of our members told me how proud they are of our sailing academy. They should be proud as there are not many yacht clubs doing as much for youth sailing as we do at the RCYC. There are no cons to run a youth sailing program. It is a win-win situation for all of us.

It was also great for Daniel Agulhas to win the prize for the Junior Sailor of the year. He dedicated a lot, if not all of his time to sailing during the last 5 years. He is one of the most qualified coaches in our academy and also runs the Zeekoevlei Training Center. So far he grabbed every opportunity to be involved in various race campaigns and willingly raises his hand to be part of sailing seminars and training courses. He was recently selected and completed an ISAF coaching course in Durban. He is now qualified to coach even for international sailing vents. He was also taking part in the delivery of the Smart Tri40 from the Seychelles to Cape Town and found his sea legs very quickly. He will be our most experienced student in our upcoming C2R campaign.

At the sail training on the Sunday we had 18 students lined up eager to go sailing. I wonder if some of them did get inspired from the awards evening in some ways.

There is another thing that really impressed me that evening. All of our students did show the expected etiquette and none of them had too much to drink. In fact most of them joined in the exercise program after the speeches. They hit the dance floor, like many other members. It’s great to see that the kids can have a lot of fun without the influence of alcohol. On the dance floor our Homestead students would have been uncontested, if Stefan Hundt wouldn’t have given them a dance lesson. Stefan, despite his advanced age and being in a different weight class than our students, proved to be a challenger of note. After the party came to an end, Stefan told me that our youngsters could learn a thing or two from him. He is also of the opinion that nobody should be allowed on the deck of any boat if they have not shown the basic footwork needed to move elegantly over the dance floor. He’s got a point. In future will implement dance lessons right after the swimming lessons.

According to our 2016 financial report, academy expenses amounted to R 214.000. This might sound like a lot of money but if you put that in relation to the yearly bank charges of R 330.000, one will soon realize how much value we are getting out of a fairly small investment from our academy.

Since we are all worried about our lease agreement with PORTNET and the existence of our club after the lease does expire, we should all agree that the academy will be the single most important investment of our club. Without a significant youth content and without the ethnic diversity of our academy we will not stand a chance in any future lease negotiations. Furthermore, a lot of boat owners are already benefitting from a constant flow of young sailors towards the Club and IRC racing fleet. Chances are that all of these young sailors did benefit from our academy in one or the other way.

I have already announced that my involvement in the sailing academy will have to come to an end. My initial plan to make myself available for a period of 6 month, to set up a structure in our academy, has been extended 5 times already. Even if someone might be able to treat this job as a part time job, I personally was not very successful in putting a time limit on my involvement with this great youth program. I got personally involved in all sailing matters of our students and this kept me quite busy during the last 3 years. Most of the students I have cared for have now grown up and are also showing some real sailing talent outside the academy. My mission is almost completed.

I hope we will find other members who can relate to our academy in a way that we are not only able to continue this program but to rather grow and expand it steadily. The next bearer of this position does not have to get sucked into it like I did. If we find a way that enough members will step in and are willing to dedicate just a few hours every year to our academy, it would become a lot easier for the person who runs the program. I have often invited club members to be part of our academy sail training. They never say no but they also can’t give me an indication when they might be available. This is quite frustrating and I have given up to ask other people for help. If we want our academy to prosper, we need more people to assist us to move things forward.

To handle the workload of the ever increasing number of students, the academy has employed one of our own students, Jason Gray, to assist in the running of the academy. Jason will soon get the first-hand experience how it feels to stand on the other side while teaching the students. We wish Jason the best of luck in his new endeavor.

The success and sustainability of our sailing academy could become the biggest bargaining tool during the negotiations with PORTNET in regards with our lease agreement. Let’s not only make our academy good enough to satisfy the port authorities, let’s thrive to give a lot of young sailors a fair chance to make it to the top of our sport or let’s help them to find a job in the marine industry.

We should reduce the bank charges and put the money into sailing. This will be a true investment for the future of the RCYC.

Just another busy weekend at the RCYC Sailing Academy. Last Saturday we had all 4…