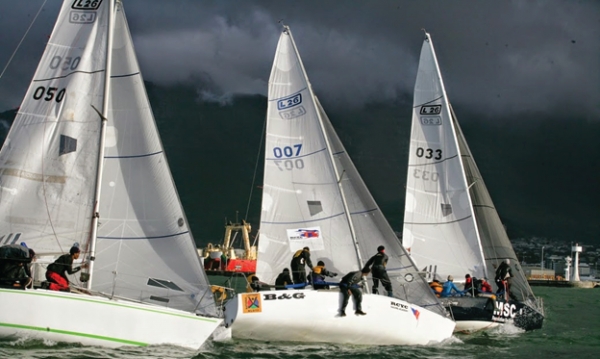 From the youth perspective there has been a hive of activity at our club during the last 3 weeks. The Youth Regatta itself made all the hard work and logistical problems worthwhile, to gather as many young sailors at our club as possible. We managed to enter 11 L26 for this yearly event and were therefore able to announce racing in a one design fleet, which is a lot more interesting to race in and to watch.

What a showcase of sailing skills and sheer determination it was to watch these young sailors battling it out in less than ideal sailing conditions.

When Toni Mainprize came up with the idea 3 years ago and pulled it off almost single handed for the first two years, nobody could know that this event would become such a high class sailing event for young people.

Positions of the top spots changed after every round and the last race would establish the winner of the regatta. 4 boats had a realistic chance to win until the last race. It couldn’t have been any closer.

At the prize giving we were able to hand out 4 skipper’s ticket to some lucky youngsters and many other nice prizes have been made available. This event has got a good potential to grow year by year. 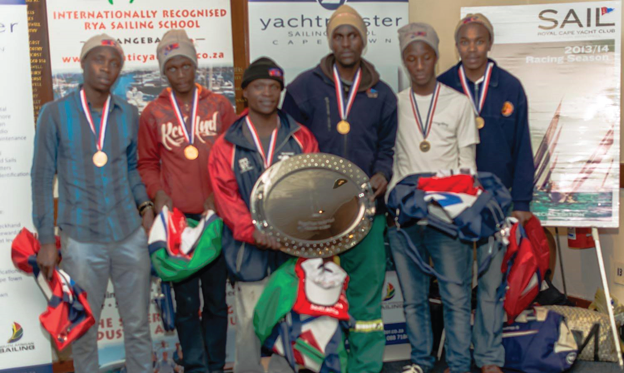 3 of our students have been invited to participate in the Vasco da Gama Race last week. It was the first time that these students had a chance to use their newly acquired passports and to experience a foreign country. The race wasn’t exactly a walk in the park and these young sailors definitely showed the sailing skills and endurance to do an ocean race. You can find the write up under Latest News of the RCYC homepage.

The support we do receive for our sailing academy and for youth sailing in general is quite overwhelming.

SAORT started it and made funds available to sponsor young sailors a skipper’s ticket.

So far Daniel Agulhas, Michael Hardy and Nic Faraday have successfully finished their exams and are proud skippers already. Shane Hendrickse will do his radio license on the 7th of July and we will hopefully have another skipper in our ranks.

It doesn’t stop there. We received another 4 skippers tickets as prizes for our RCYC Youth Regatta from the following sailing schools:

And that’s not all. The Yachtmaster Sailing School has announced to support the RCYC Sailing Academy with 2 more skippers tickets.

And there is one more:

The generous donations and the help we do receive from so many people makes me very proud to be involved in this youth sailing program.

On behalf of the RCYC Sailing Academy I would like to forward a big thank you to all our supporters.

We are so lucky that we have missed the cold front last week. Thursday and…