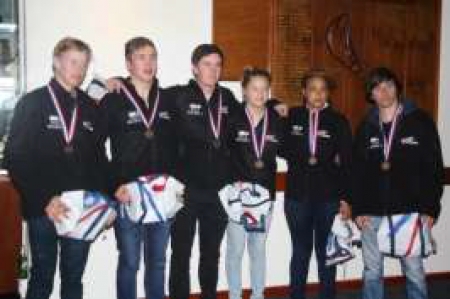 Nine L26 youth teams were competing in the Youth Regatta at the RCYC this weekend. Light westerly on Saturday and a stronger NW on Sunday allowed a total of 6 races. The organizers of the event did have a slick on water operation and managed to get 6 races in the bag with very little time wasted on the water. Well done to bridge team and the mark layers.

With 4 entries from our own academy we were well presented. After the first day we had the academy team on Escape on top of the leader board. This might have been
a bit upsetting to all the other top teams. Team Quiver on B&G was sitting on 18 points after the first day. Not the start anyone would have expected from them. Only comment I heard from Daniel: “You wanted us to lose, here you go”. Of course this was taken out of context to what I’ve said, “You can’t win unless you learn how to lose “. However they might have misinterpreted my words, it seemed to work for them. The next day they were sharp enough to win two races in a row and came second in the last race. This was an awesome recovery from a treacherous first day. That
effort even allowed them to collect their silver medals at the price giving.
Team Vasco on Escape managed a respectful 3rd place after 3 rather challenging races on the last day. I personally do expect this team to improve a lot during the next two weeks. They have put a lot of work in their boat and have a great backup from MAC and their families. The fundraiser was well supported at their club and the team will contribute towards our academy program. We have already laid out plans to a prolonged partnership with MAC for the years to come. It’s so great if people understand the benefit to promote sailing, even if it happens far outside of their club premises. Well done to MAC for supporting our academy program for the betterment of youth sailing. All in all our Lipton teams are well on track to improve their sailing skills until the big showdown in 2 weeks, the Lipton Challenge Cup 2015.

Toni Mainprize organized a lot of great prizes for the winners. A big thank you to Re-Sails for coming to the party.
They are also supporting our academy teams with great prizes for the raffle this Friday. Obviously there were more teams showing their sailing skills on the weekend. The Hout Bay team LTC Phoenix was always in the mix and never scored higher than a 3rd place. I am not even sure if they showed their full potential yet. We will see next week what they really got up their sleeves. They sure didn’t invest all that money for a runner up position. They are the team the Lipton Cup defenders must really worry about this year. LTC Phoenix want the next Lipton Cup being held in Hout Bay. All the team members in this campaign are old enough to combine their sailing talent with the experience needed to win a regatta of this magnitude. So far they did everything right. They found a generous sponsor, hired the right people, selected one of the fastest boats in the L26 class and last but not least have a new set of sails for the event.
The newly formed team Skybound, sailing on Greenlight looked pretty competitive. We all know that the boat is fast but these guys did a fine result without any training, of course with the help of two of our academy students in their team. The fact that they sailed 50kg under the crew weight limit makes this even more special. Watch out for these boys. They do have the talent and a well-funded campaign to back them up. And in 5th place we already saw the girls team Tiletoria. You have to give it to the girls. They worked and trained the hardest during the last 2 weeks. Heidi already announced that they will train at least twice before the Nationals. The academy is helping out were we can and allowed them to make use of our boats. Their newly faired and sprayed boat will be ready for the Nationals. I am sure they will be able to challenge the top teams at times. Good luck girls.