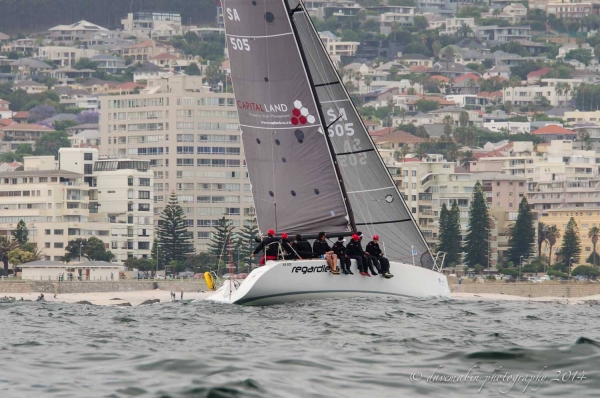 The RCYC Sailing Academy in the GAC Laser IRC Nationals:

Our RCYC Academy sailing team on Regardless got a big nock just before the IRC Nationals, when two of our students announced that they can’t make the regatta because of the upcoming exams. You can’t argue if the students show the right priorities in life and put their exams first.

That left us two crew short and we had to reshuffle the whole team. I seemed to be the only one questioning our performance with two less crew members, the rest of the team was very confident that we would still be able to race competitively. I have to give it to the youngsters, they really worry a lot less than us older folks and just try to make it work. When I asked our team who could possibly replace our missing foredeck, it didn’t take long for the 15 year old Wade Ashton to step up to be in charge of the foredeck. It didn’t seem to bother him much that he has never done this job before. Kudos to these kids, they really show no fear when it comes to sailing.

Our motto for the regatta, was to sail as competitively as we can, but rather not expecting a podium finish. We were clearly off the pace in race 1 on the first day but were able to get the settings right in all the other races. Our boat speed and tacking angles improved constantly and we managed sail the boat to its rating most of the time.

In the middle distance race on Saturday we pulled nicely away from our fleet and were able to open up a considerably gap at the first upwind leg to the laid windward mark in front of Bakhoven. We all knew that the wind would get very light around the corner of Greenpoint lighthouse and I wonder why the race committee was still sticking to the given coordinates of this mark. We were up with the first boats running out of breeze and this would clearly cost us the race as the slower boats managed to get right up to our transom again. After seeing to many zero digits on the speed dial for at least one hr, the damage was done and we were not able to gain enough time on the slower boats again, after we reached the breeze in Sea Point. The given double points for this race didn’t help us either.

Funny enough we were still laying in second position before the last day of the event, but we had to come up with something special to win our class. In the first race of the day we got off well after a perfect start and were able to open up a 300m lead to the other boats at the weather mark. This would clearly be enough distance to win the race … what happened next was a hard pill to swallow. As the leading boat we were in a completely different breeze than the rest of the fleet. Basically the whole fleet came screaming down to the finish with one big, god sent puff and we could do nothing else than watching the boats closing in on us. In fact 3 boats passed just before the pressure reached us on the finish line. That was another race down the drain but we kept our hopes high to get two more races in for the day.

When the forecasted SE breeze finally came through we started the race in proper breeze for a change. One more time we were able to get Regardless quickly up to target speed on our brand new No3 and opened up a nice lead at the weather mark. We wanted to win that last race quite badly, but after a quick crew chat we decided against the kite. We would not have been able to get through the jibe without putting the boat on its ear or worst, getting someone hurt. Wade, our 15 year old, first time foredeck was doing a great job so far but this would have been way out his league.

Race 3 with the double points and race 4 did not go our way, in fact we were just plain unlucky. More important than good luck and the overall position, is the way our crew managed to improve throughout the regatta. We were constantly learning the boat and sorting out the crew work. One of our students, Daniel Agulhas, had the chance to do the tactics and he did a fine job. Usually it’s the most experienced sailor on a boat doing tactics. Not so if you sail with our academy students. Our youngsters happily step out of their comfort zone and take responsibilities.

That brought a nice regatta to an end. Our youngsters on Regardless proved one more time that they can perform, given them a chance, even if you put them in positions they have never raced before. A big thank you to William Brooks, who offered the use of Regardless for the training of our academy students. Because of opportunities like that, we might be able to fast-track the sailing career for some of our students in yachting.

Only a few days after the IRC Nationals, team SCA invited our academy students to their shore base in the V&A, to give them a run down on their Volvo boat and to give them an insight into their campaign. Thanks Ingrid, for lining that up for our students, they had a great time.

Our academy students are meeting a sailing hero, Dee Caffari.

Unfortunately the whole Volvo stopover in Cape Town is in the middle of the exams and a lot of our students were not able to take part in the activities. As always, school comes first, even if it hurts.

There are a few more action filled days until the start of the Volvo race next Wednesday. The In Port race with a forecasted strong SE could become a real highlight on Saturday.

Our RCYC Academy students do get a lot of opportunities other young sailors don’t have. Let’s just hope many of them will be inspired and are willing to take their yachting to the next level.

The 7 Volvo yachts were back in the water in front of us.

Next thing Ingrid Hale was introducing us to Anthony Spillebeen and Dee Caffari.

It suddenly dawned on us this was DEE CAFFARI, the first and only woman to sail single handed both ways around the world and to have completed 3 solo circumnavigations.

Dee said we would visit the all-female team SCA boat and then have a chat in the SCA hut.

Oh my gosh, we were going to step onto a Volvo Ocean 65. The girls were screaming with excitement as Dee led us down to the boat.

As we stepped on board the “Magenta Rocket” we realized we were the first to do so after the boat was put back in the water.

Dee showed the girls around the boat and took all the questions in her stride:

How do we get a Team SA?
Should teams be mixed male and female?
How do you get selected?
How does the canting keel and the dagger boards work?
Who does the weather routing?
How many clothes do you take?
How did you get passed Mapfre?

One could sense the excitement from both the Academy girls and from Dee who saw the enthusiasm of our future sailors.
Thank you team SCA and Dee Caffari for an opportunity of a lifetime, the Academy kids are even more inspired.

The sum up the Summer Fling regatta is not going to be easy. Like many…